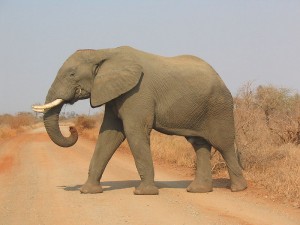 Elephant in the Kruger. Photo by Felix Andrews

Unbelievably, to most South Africans at least, the majority of the world’s population has only managed to see the wildlife we take for granted on television, the Internet, or on their own Blu-ray player. This is sad, and should prompt us to take as much in of our natural environment as is possible.

The central plains region of the Kruger is well equipped with accommodation facilities as a consequence of the fact that the region is the best in the Park for game viewing. This is to say that there are three well frequented and well liked rest camps, 2 private camps, 2 wilderness trails camps and numerous rest stops where one has the opportunity to stretch one’s legs or have a tranquil picnic. Located next to the Crocodile Bridge Gate is the relatively small Crocodile Bridge Camp, which sleeps 58 guests in standard accommodation and seventy two in the campsite section. The camp is small enough for it not to have a restaurant, and is a really good base from which to launch explorations into the southern landscapes of the park (which are well known for their rich diversity of wildlife).

Thirty four kilometres north of the Crocodile Bridge camp is the Lower Sabie Camp, another of the Kruger’s well known and popular sites. The camp offers guests a variety of activities including tree-identification, bird watching, and game viewing along the Sabie River. Considerably larger than the Crocodile Bridge camp, Lower Sabie camp hosts 230 guests in under-roof accommodation, and 170 more in the campsite section. Larger than the Lower Sabie site, and the third largest in the whole Park, is the Satara Camp, which accommodates 440 guests in beds and 360 more in the campsites. Satara is situated in the northern reaches of the region and is generally believed to be one of the best locations for predator spotting.

Other notable features in the central plains region include an exclusive, privately owned and run lodge operating on the Nwametsi site and a lookout spot on Orpen Dam (a perfect place to while away a few hours in the shade) overlooking a gorge running through the Lebombos.

This region isn’t littered with camps, and after excluding the Skukuza camp situated on the border of the region (and a good HQ from which to navigate the area), there remains only a handful of places that can accommodate guests. These include only 1 minor rest camp, two Bushveld camps and one camping only campsite.

The Orpen Camp is intimate and un-crowded, containing only forty four beds. The camp is situated next to the Orpen Gate, and relatively nearby is the Maroela campsite which can host up to 120 sleeping in caravans. Similarly, the Talamati Bushveld Camp is intimate, rustic, and equipped only with the bare essentials: this makes it a truly unique place, and a prime place to enjoy the quiet of the African bushveld.

The Camp only has 10 six-bedded and 5 four-bedded cottages. The bushveld camp at Jakkalsbessie has been converted into a luxury lodge, which is privately run.

Place of interest in the Region

Located along the Orpen to Satara road are two rest spots where Park guests can view the famed Timbavati River where elephants and buffalo often cross the river and use it as a watering hole. Guests are permitted to exit their vehicles at the stop situated closer to Satara, which is also permitted at the Timbavuti picnic site located about thirty two kilometres further north along the Timbavati River. Another picnic site is located at Nhlanguleni, at the halfway point between Skukuza and the Orpen Gate, on road S36. A 3rd picnic area is situated at Muzandzeni.

View all posts by Webmaster →