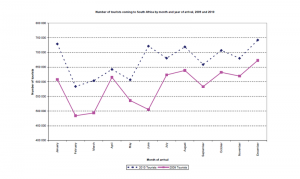 If you were under the impression that the plethora of various laptops for sale indicated that SA’s future lay in ICT and related fields, think again…

Tourism is one of South Africa’s fastest growing industries. It has more than doubled in size since our country’s transformation to democracy, and, as of 2009, tourism has contributed a significant 8.3% to South Africa’s gross domestic product (GDP), and accounts for 7% of the nation’s employment.

The sector can be subdivided into six main tributaries: business tourism (business tourists are likely to treble the amount spent by leisure tourists during their stay in South Africa); cultural tourism; eco-tourism; paleo-tourism (the name derives from palaeontology, and refers to South Africa’s unique multitude of sites significant to the history of humankind in its entirety); adventure tourism; and sports tourism (owing to the nation’s love and support of all sporting events and activities).

Secondary industries are also needed to support the tourism sector: car rental agencies, and even cars for sale for the purposes of touring, travel insurance and tourism orientated maps etc. are all further contributing to South Africa’s economy.

Business tourism targets business travellers who have some time to participate in tourist activities in their locale before or after their scheduled engagements: it is not surprising to hear that many business people, after visiting South Africa, search websites that allow individuals to sell property online, and purchase local accommodation either for personal use or for investment purposes.

The Kruger National Park, the Transfrontier Parks and many other nature reserves serve as attractions to international tourists, and with the rise of sustainability and “green” thinking, South Africa can be seen as a leader in nature conservation. A good example of how the natural environment can help boost local economies can be found in the symbiotic relationship between Thonga Beach Lodge and the Isimangaliso Wetlands Park.

Paleo-tourism holds interest for visitors as South Africa, endowed with the Heritage sites of The Cradle of Humankind and the Sterkfontein caves, is in the position of being able to uncover some of the secrets of humankind’s most distant relatives and possible ancestors.

The “outdoors” climate of South Africa, acting in combination with the selection of natural resources that makes adventuring not only a possibility, but rather a probability, has engendered a culture of adrenaline seeking: this culture is as infectious as it is fun for the brave… and tourists find this side of South African life a worthwhile way to spend vacation time.

Finally, the sports tourism industry includes all those tourists who visit South Africa in order to follow their own national or franchise teams as they compete against South Africa’s finest sports men, women, teams and athletes.

Although, strictly speaking, not part of the BEE Charter, tourism in South Africa has extensive benefit to those engaged in the country’s second economy. In particular, South African crafts, are always in demand, especially by foreign tourists who would like to take home with them not a mere souvenir, but a quality, uniquely African artwork . Many crafts and unique artworks are also available through online shopping platforms like bidorbuy.co.za.